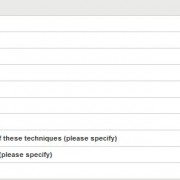 What’s the best way to highlight text in emails? That’s the question I posed in a poll earlier this year. I took away three main lessons from your responses. Thank you very much, respondents, for answering and generously sharing your email tips! 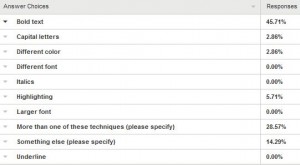 Use bold to emphasize text in your emails. That was by far the most popular answer to my poll asking, “What technique do you use for emphasizing text—for example, an appointment date—in an email?” This squares with my instinct to bold for emphasis, as in the example below:

However, with 45.71% selecting bold, it failed to win a majority. The next most popular answer, at 28.57%, was “More than one of these techniques.” I sometimes use bold plus larger font size or capital letters. You suggested other options, including some that are mainly useful in plain-text emails.

Your poll responses provided a valuable reminder to me. Unlike me, some people force incoming emails into a plain-text format. This strips out fancy formatting—such as bold, italics, and colors—that relies on HTML code. People do this for reasons such as reducing the risk of computer viruses or cutting the email’s size once it’s stored on their computer.

Take note if you have an important correspondent who only reads emails in plain text. You’ll need to adapt your formatting for them.

How can you learn about your correspondent’s email-reading capabilities? If their emails to you look as if they were created on a typewriter, they’re plain text. Also, often when you reply to their emails, you’re not able to apply fancy formatting using HTML.

Some experts suggest that you send emails in both HTML and plain-text formats. But who has the time? The only exception is if you use an email newsletter program such as Constant Contact. Constant Contact automatically generates plain-text versions of my newsletters, which I could edit for formatting that’s easier for plain-text readers to absorb. Even better, it provides a link that a plain-text recipient can click on to see the nicely formatted version.

If you send plain-text emails, my poll respondents suggest using asterisks, underscores, or capital letters to highlight text. Here are some of their comments:

I particularly like the idea of using capital letters because they’ll seem less strange and old-fashioned if some of the readers of a group email use HTML.

I agree with the respondent who said, “I think the more important point is to make sure writers are getting to the point quickly in their email messages. They need to keep the reader’s needs for information in mind and get every message off to a fast start.”

Your comments reminded me of other techniques for highlighting content in your emails, including

Here’s a reminder from a respondent that what you see in your email program isn’t always what appears on the recipient’s screen:

I use a Mac and one of my editors uses a PC. She kept putting what looked like little J’s after sentences in her mails to me. I finally asked what those were – turns out, that’s how her smiley emoticons were being interpreted by Mac Mail. (Not sure what she saw with my Mac smileys – I think something weird, too.) I know this isn’t about emphasizing text per se, but it does show some cross-platform problems still exist within email. 🙂

What will YOU do differently now when you write emails?

After reading your poll responses, I may use capital letters more often for emphasis since they appear the same in both HTML and plain-text emails. Is there something you’ll do differently after reading my poll results?

Our LinkedIn connection isn’t an invitation to spam

Are financial predictions too risky for investment commentary writers?
Scroll to top