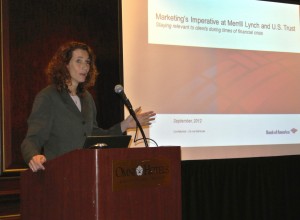 Bank of America’s business units, Merrill Lynch and US Trust, needed to rebuild their reputations following the financial crisis. Justine Metz, marketing and sales support executive for global wealth management & investment at Bank of America, outlined the business units’ approach in her September 18 presentation to the Financial Communications Society (FCS) in Boston. Metz titled her presentation “Marketing’s Imperative at Merrill Lynch and U.S. Trust: Staying relevant to clients during times of financial crisis.”

“I wanted us to fight more.” This was Metz’s initial reaction to the need to boost her business units’ reputations following the financial crisis. After all, banks’ reputations had hit all-time lows, and no one was giving Merrill Lynch and US Trust credit for doing anything good.

However, Metz went with “reverse psychology” in her unit’s response. While they continued to push back on inaccuracies, the focus was on advisors and their clients, she said. “We had to shut up because no one wanted to hear us.”

Key role for uber-brains of the advisory business

“Advisors shielded the brand throughout the crisis,” said Metz. Merrill Lynch advisors continued to receive high ratings from clients even as the industry suffered declining ratings. Merrill Lynch also got credit for having great information produced by smart people. Metz calls them “uber-brains.”

The rise of social media gave the firm non-traditional ways to highlight its smarts, so it

could spur clients and influencers to talk about it. It introduced a Twitter account (@MerrillLynch, which has almost 25,000 followers), a YouTube channel, and iTunes apps, including MyMerrill and BofAML Research Library.

Why social media? “Our main strategy is to empower our clients to talk to one another,” said Metz. That fits in with today’s emphasis on communications by people rather than institutions.

TV ads were on hold for three years while the firm focused on social media. When it rolled out a new commercial, it didn’t throw out its strategy of getting its clients talking. Instead, the new Merrill Lynch and US Trust ads about “The Power of the Right Advisor” and “What is Worth,” respectively, are designed to complement that strategy.

The presentation by Metz was the second Boston event put on by the New York-based FCS. A steering committee is developing a Boston chapter. To learn more—and to volunteer—contact FCS President Kevin Windorf at 212-413-6044. I’m a volunteer. I enjoyed meeting new people at this event.