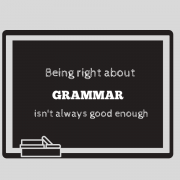 If you want people to pay attention to your content, not your writing, then using correct grammar isn’t always enough. I could go on about readability and other factors. However, in this post, I want to focus on grammar.

Sometimes correct grammar that looks wrong will distract your readers from your content. That happened to me earlier this year. I sent out a newsletter that included the following line: “Their using my Twitter name—my @name, @susanweiner—forces their tweet to my attention.”

I checked with some grammar-savvy friends. They said, “Their” is correct with the gerund form of “use.” That’s explained in “Using the Possessive Case with Gerunds.”

However, my readers who cared enough to contact me made an important point. The way that I’d written that sentence prevented some readers from focusing on my message. In other words, I was correct, but I’d failed to communicate effectively.

With the help of my friends, I came up with some alternative ways of saying the same thing. I ran a poll in my newsletter to see which version my readers preferred.

The winner, with 50% of the votes, was “By using my name—@susanweiner—they’re forcing me to notice their tweet.” It was followed by:

Ouch! Nobody preferred my original sentence. This is a good reminder for me to slow down when I write. Still, I’m not sure what technique or rule would have alerted me to the problem with this sentence. I need to reflect on this.

Another challenge: singular “they”

One respondent said, “The loser tweeter appears to be singular. If so, ‘their’ is wrong. Use the correct singular pronoun, or ‘he’ for neutral.” Of course, the problem with that is that “he” will offend some readers. And “his or her” is clunky.

“Their” is increasingly accepted as a gender-neutral singular possessive. Still, its use distracts people who were taught that “their” is strictly plural.

I often use the workaround that I describe in “Plurals: your best friend for gender-neutral financial writing ” However, in the context of my original blog post, the losers were plural, making “their” correct. (Of course, my commenter lacked the context, so he or she didn’t know that.)

I appreciate all of my readers who correct me. Thank you!

You give me reason to reflect on my writing, and you often correct embarrassing mistakes. As a high schooler, I did not get a good education in correct grammar, as I discussed in “Confessions of a grammar ignoramus.” I still have a lot to learn.

Click here to view the newsletter archive
MISTAKE MONDAY for October 22: Can YOU spot what’s wrong?

MISTAKE MONDAY for October 29: Can YOU spot what’s wrong?
Scroll to top