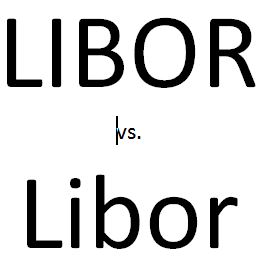 Is it “LIBOR” or “Libor”? I’m startled by seeing the acronym for the London Interbank Offered Rate spelled with only the initial letter capitalized. I believe that every letter of an acronym should be capitalized to communicate that the word is an acronym, a form of abbreviation created from initial letters or syllables of a term such as the London Interbank Offered Rate.

Garner’s Modern American Usage agrees that using all capitals is common in American English, but the British tend to capitalize only the first letter. Perhaps the U.K. is the origin of this practice spreading to the U.S. According to Amy Einsohn’s A Copyeditor’s Handbook: A Guide for Book Publishing and Corporate Communications, many newspapers now use “Initial cap only for acronyms five letters or longer that are pronounced as words.” For example, “Nafta” or “Erisa.”

I don’t like the trend to mix the upper and lower cases in acronyms, turning LIBOR into Libor. Spelling an acronym using only upper-case letters gently reminds the reader that the term is an acronym. This is helpful, in my opinion.

To define and use parentheses or not?

Acronyms are often spelled out when first used in a document. For example, the Employee Retirement Income Security Act (ERISA). However, Einsohn says, “In documents addressed to scientists, technical experts, and other professional experts, acronyms that are standard in the field may usually be used without any introduction.”

In the case of LIBOR, the spelled-out term doesn’t mean much to readers. It’s useful to describe how LIBOR is used, for example, as a benchmark for short-term interest rates.

How do YOU spell and introduce LIBOR? Please join the conversation.

How to market your self-published book: Lessons from my experience