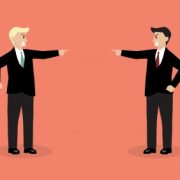 One of my LinkedIn Pulse posts on a controversial topic received 34 comments in less than two days. It also received 33 likes and more than 200 views in that period. That floored me.

The comment-spurring post was “Periods: One space or two at the end of a sentence?” It’s a topic that spurs strong feelings in people, especially if their teachers or editors have emphasized that there’s only one correct answer.

What can you learn from my controversial topic experience?

You may assume that my post generated comments because it was controversial. In “13 Types of Posts that Always Get Lots of Comments,” ProBlogger’s Darren Rowse lists “Debate or controversy posts” as one of his 13 post types. “Put two or more opposing arguments to your readers and step back to see what happens,” says Rowse.

I think it’s more than that. I think part of my post’s success was due to my choice of a controversial topic that is also safe. Punctuation isn’t a sensitive topic in the same way as politics or religion. Readers can disagree on punctuation without others thinking “Oh, how horrible that person is for opposing my opinion!” I doubt that clashes over punctuation have ended any friendships or turned off potential clients.

Another strength of my post was that it posed a question, inviting comments. Moreover, it was an easy question—one space or two?—that could be answered briefly. Rowse’s article listed question posts among the types mostly likely to spur an above-average number of comments. He said, “Ask a question and those who hear it are wired to answer it. I find when I include a question in the title of my posts that comment numbers tend to be at least double normal posts.”

My post wasn’t one of my more in-depth or insightful posts, much as it hurts me to say this. Sometimes being safely controversial and asking an easy-to-answer question can override the quality of your work. On the other hand, I am relieved to report that some of my more thoughtful posts have also spurred comments. In his article, Rowse listed “meaty posts” as good candidates to spur comments.

What’s YOUR experience with comments on LinkedIn Pulse?

To get a sense of whether controversial topics—especially those that are safe and pose a question—work best at spurring discussion on LinkedIn Pulse, I invite you to share the name of your most commented-upon LinkedIn Pulse article in the comments, along with a link to your post.

If you’d like to learn more about my experience with LinkedIn Pulse, read “My experiment blogging on LinkedIn.”

Click here to view the newsletter archive
What if my financial article has too many examples?

6 design tips for your first infographics
Scroll to top