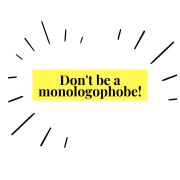 “A monologophobe…is a writer who would rather walk naked in front of Saks Fifth Avenue than be caught using the same word more than once in three lines,” wrote Theodore M. Bernstein in The Careful Writer: A Modern Guide to English Usage.

Bernstein admitted that “…avoidance of monotony caused by jarring repetition of a conspicuous word or phrase is desirable.” But, he said, “…mechanical substitution of synonyms may make a bad situation worse.”

I see this mechanical substitution most often when writers struggle to avoid using the word “said.” Bernstein illustrates this with a list of substitutes including “averred, asseverated, smiled, chuckled, grinned (plainly or mischievously), groaned, expostulated, ejaculated, declared, or asserted.”

But “said” is simple word that holds up well to repetition. Bernstein praised American writer Ernest Hemingway on this count. “If Hemingway did nothing else for American literature, he reestablished the virtue and dignity of say and exposed the folly of synonymomaniacs,” he said.

In the investment world, the word “returned” is also subject to embellishment, as I discussed in “How to discuss index and portfolio returns: My case against synonyms for ‘return.’”

Don’t go overboard in introducing variety into your writing!

MISTAKE MONDAY for October 31: Can YOU spot what’s wrong?
Scroll to top