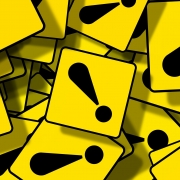 Exclamation points are called “screamers” in the newspaper world, as I learned in Theodore Bernstein’s The Careful Writer. And they have many other colorful names that you can learn about in “‘Screamer,’ ‘Slammer,’ ‘Bang’… and 15 Other Ways to Say ‘Exclamation Point’” in The Atlantic. However, the point of this post is to suggest that you use them in moderation in your serious business communications.

Limit use of exclamation points

Bernstein argues for restraint by saying, “the statements that require it—those containing a strong emotional charge—are themselves relatively rare—and because omitting the mark often produces a kind of understatement that is strong in itself.”

Bernstein scorns “Now!” and “New!” as “tricks of salesmanship” that “bear no relationship to general writing.”

Since Bernstein’s book was published in 1973, exclamation points have, if anything, become more popular. “Buy now!” buttons seem to be everywhere.

But people still argue against their abuse. “Minimize the use of exclamation points” is one of four rules for emails, as shared by Daniel Post of the Emily Post Institute in “Mind Those Manners: Kids Need Lessons in Email and Phone Etiquette,” a 2020 article in The Wall Street Journal.

The Copyeditor’s Handbook: A Guide for Book Publishing and Corporate Communications echoes Bernstein, saying “Only rarely are exclamation points needed in expository writing. (Novelists, letter writers, and playwrights, of course, are free to revel in them.)”

Exclamation marks online and in email

In her Atlantic article, Megan Garber calls the exclamation point “cockroach of the punctuation world.” She adds:

And that’s particularly so in the digital space, which so infamously encourages its proliferation (!!!!). The exclamation will, despite and because of all the things that make it terrible, survive us all.

My take on exclamation marks

Exclamation mark use undercuts the seriousness of your business writing. Also, when used to excess, exclamation marks lose their wallop.

This is especially when you use the mark outside of sales pieces and informal communications, such as emails and texts.

However, I’ve had to overcome my dislike of exclamation marks in emails and texts. That’s because I’ve read articles like “Is your texting punctuation sending the wrong message? Yes. Maybe! Think so …” That article says that to younger texters, “An exclamation point might feel like a tool indicating politeness.” However, the author also warns us that during the COVID-19 pandemic, the exclamation mark can seem “heartlessly chipper.”

Other articles have warned me that I might seem cold if I write “Thank you” instead of “Thank you!” in my emails. I was particularly struck by the message in favor of exclamation points presented in “The Tyranny of the Exclamation Point Is Causing Email and Text Anxiety” in The Wall Street Journal. That has changed my writing in emails, but not in the white papers, investment commentary, and financial articles that account for most of my work.

In texts and emails, take your cue from the people with whom you’re communicating. In your traditional business communications, stick to the traditional rules.

MISTAKE MONDAY for November 30: Can YOU spot what’s wrong?
Scroll to top