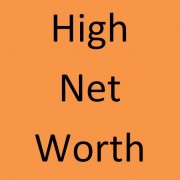 “High net worth” and hyphens

My gut told me to use hyphens in “high-net-worth” investor.” I checked my gut with a survey. The survey’s first question asked, “Which of the following is correct? They differ in hyphenation.” 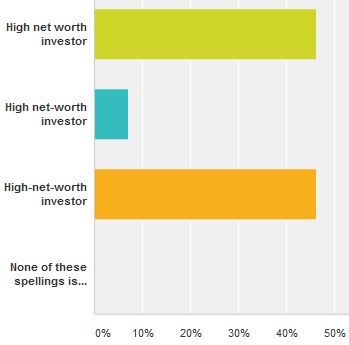 Here’s what some fans of the unhyphenated “high net worth” said.

Use of the hyphen is far from standardized. It is optional in most cases, a matter of taste, judgment and style sense. But the fewer hyphens the better; use them only when not using them causes confusion.

Avoiding confusion is one reason that some readers favored hyphenation. They wanted to ensure that no one thinks the investors are high on drugs instead of net worth. “You need two hyphens to make things crystal clear,” said one respondent. I agree. I see high-net-worth as a compound modifier.

I don’t always hyphenate compound modifiers. When in doubt, I look at how respected sources, such as The Wall Street Journal handle the term. It hyphenates “high-net-worth investor,”as you can see in “Voices: Joshua Coleman, on Using a ‘Quarterback’ to Serve High-Net-Worth Clients.”

Whether you hyphenate or not, please pick one style and stick to it.

“High net worth” and your prospects

High net worth (HNW) is a useful term for discussions among financial professionals. But, when your prospects read “high net worth” do they think, “Yes, that’s me”?

The people whom you see as HNW may not agree. They may see themselves as middle class according to “Who You Calling Affluent?”, a study by CEB Global that’s no longer available online. (By the way, I typed the study title accurately. I checked multiple times to make sure that there was no “are” in it.)

Only about 20% of the consumers we identified as affluent ($100K+ HHI and/or $100K+ in investible assets) considered themselves, or their income brackets, to be affluent. Even more surprising, more than half of consumers with household income above $500K per year or more than $5 million in investible assets don’t accept the “affluent” moniker, revealing a true discomfort with the term.

Before I found this CEB study, I polled my readers, asking “What’s the best way to refer to your target audience in marketing materials aimed at investors who have a high net worth?”

Only 25% chose “HNW.” “Affluent investors” was the most popular choice. 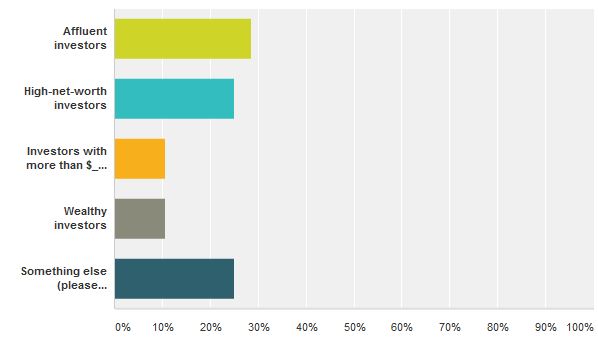 In favor of HNW, here’s what one person said, “Per my advisor friend: ‘Wealthy or affluent. It’s subjective but people with wealth are aware that they have it. HNW is an industry term that makes them feel like a trophy. Generally I find people start considering themselves wealthy when they have 1-2 million of investable assets, 5 million+ in real estate, or a 10 million+ operating company.’”

Another person who favored “affluent” commented that the term “throws a big net.” That’s an interesting point. Among some audiences, “affluent” refers to investors one rung below HNW. According to one definition, “affluent” ranges from $100,000 to $1 million in investable assets. HNW starts at $1 million, according to this example.

A respondent who voted for “Investors with more than $__ to invest” said, “Nobody likes to be labeled. A dollar figure gets straight to the point and is completely objective.” Identifying specific dollar levels was much less popular than using a broad label. However, I was interested to see that a 2015 ad by Bessemer Trust stated “Minimum relationship $10 million.” It seems as if most firms targeting individuals or families are vague about how rich their new clients must be. Perhaps specificity gets easier as your minimum account size rises and it becomes more important to screen out prospects with insufficient assets.

Another respondent suggested using the term “individual investors as opposed to institutional.”

Personally, I’m not wild about using labels such as HNW outside our industry. I liked this respondent’s answer, “I don’t usually refer to their net worth. I focus on where they are in their financial life: nearing retirement.”

I’m grateful to everyone who answered my questions and shared their thoughtful comments. Thank you!

Blogging the mistakes your clients make
Scroll to top