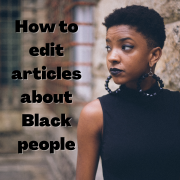 Most investment writers rarely discuss race. However, I have the privilege of editing articles related to race—and advocating for greater diversity, equity, and inclusion—in my role as editor of the monthly magazine of an association of financial advisors. This has raised issues for me as an editor when reviewing articles mentioning Black people. At the most mundane level, these are small issues of capitalization and word choice. However, they feed into larger issues of how Black people are treated and perceived. The right choices are “a simple and long-overdue signal of respect for the shared identity, history, and experiences of people who identify as Black,” as discussed in “Recognizing that words have the power to harm, we commit to using more just language to describe places” on the Brookings Institution’s website.

For years, I didn’t capitalize black when referring to race. However, last year I noticed more and more publications using an initial capital in this situation. Even AP style agreed with this change, writing:

AP’s style is now to capitalize Black in a racial, ethnic or cultural sense, conveying an essential and shared sense of history, identity and community among people who identify as Black, including those in the African diaspora and within Africa. The lowercase black is a color, not a person. AP style will continue to lowercase the term white in racial, ethnic and cultural senses.

This raised a more sensitive question about whether to capitalize White in the racial sense. The magazine decided to adopt initial capitals for White, for reasons I explained in “Words matter, especially for diversity.”

When the term African American appeared in an article, I did a bit of research because I’ve heard that not all Black Americans embrace that term. The National Association of Black Journalists’ style guide entry for “African American” says:

Not all Black people are African Americans (if they were born outside of the United States). Let a subject’s preference determine which term to use. In a story in which race is relevant and there is no stated preference for an individual or individuals, use black because it is an accurate description of race. Be as specific as possible in honoring preferences, as in Haitian American, Jamaican American or (for a non-U.S. citizen living in the United States) Jamaican living in America.

African American is also acceptable for those in the U.S. The terms are not necessarily interchangeable. Americans of Caribbean heritage, for example, generally refer to themselves as Caribbean American. Follow an individual’s preference if known, and be specific when possible and relevant. Minneapolis has a large Somali American population because of refugee resettlement. The author is Senegalese American.

Accordingly, I’m asking my authors who identify someone as African American to confirm that’s how the individual prefers to be identified.

Should you refer to slaves or enslaved people? I wasn’t even aware of this issue until my assistant editor mentioned it.

The term slaves denotes an inherent identity of a person or people treated as chattel or property. The term enslaved people underlines that the slave status has been imposed on individuals. Many prefer the term enslaved person/people to separate people’s identity from their circumstances. Others prefer the term slave as a way to make a point of the circumstances. Either term is acceptable. Try to determine an individual’s preference.

Avoid Black as a standalone

A similar line of reasoning suggests avoiding referring to Black as a standalone term, but instead using Black as an adjective. For example, the UofSC Aiken’s “Inclusive Language Guide” (PDF), suggests “Refer to groups as black students, black faculty members, etc., not blacks.”

Writing inclusively and sensitively isn’t just a matter of individual word choices. That’s why some authors—especially book authors—have chosen to hire editors who are called “sensitivity readers.” One sensitivity reader sees her job as “first and foremost to improve the literary quality of a book by steering the author away from one-dimensional portraits and clichés,” as described in “What the Job of a Sensitivity Reader Is Really Like,” a Vulture article. The sensitivity reader said, “Most people are shocked by the blind spots they discover.”

For a journalist’s perspective, read “Gut Check: Working with a Sensitivity Reader” by Jane Hu, which suggests to me that sensitivity readers aren’t just for book-length manuscripts. You may be able to hire someone to work on short pieces of writing. Even getting one article reviewed could open your eyes to issues to look for across all of your communications. Hu’s article also suggests how you can find a sensitivity reader.

Avoid vocabulary that extends negative racial, ethnic, or cultural connotations and avoid usage that carries hierarchical valuation or portrays groups of people as inferior, bad, criminal, or less valued than others. At times, such language may be difficult to perceive from the point of view of an oppressor group. Don’t assume you know all the ways that a phrasing may land; take the time to check it out with others.

A sensitivity reader may be more than you can manage for your firm’s newsletter or a blog post. However, it’s always a good idea to get a second set of eyes on your writing, as I’ve often suggested on my blog. When it comes to questions of race, it’s especially helpful to have a reader of the race you’re discussing. However, be wary of overburdening that individual with solving your problems.

Here’s my blog post about working with a sensitivity reader.

Resources to help you edit writing about Black people

Let’s use the right words!

Let’s use words that show respect for Black people. As writers and editors, this is one small way that we can contribute to racial equity.

Of course, even picking the right words doesn’t guarantee that an article will be accurate or appropriate. There might be bigger issues with how the writer approaches the topic. There is a lot more to think about. However, this article is my attempt to share some practical tips from my experience.

MISTAKE MONDAY for March 29: Can YOU spot what’s wrong?
Scroll to top