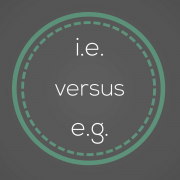 I.e. versus e.g.—do you know the difference between the two? I confess that I often do a Google search to remind myself of which is which. That’s one of the reasons I’d like to abolish these terms from the English language. But they’re not going away, so let’s examine them.

Meaning of i.e. versus e.g.

I.e. is short for the Latin term “id est,” while e.g. is short for “exempli gratia,” according to my old edition of The Chicago Manual of Style, which was my close companion when I was finishing my Ph.D. in Japanese history.

Use i.e. when you’re about to give a complete list of what the term in question means. For example, “non-U.S. stocks, i.e., international developed-market stocks, emerging-market stocks, and frontier-market stocks.”

Use e.g. when you’re only giving a sample of what the term in question means. For example, “non-U.S. stocks, e.g., emerging-market stocks.”

The key thing to remember about punctuating these two abbreviations is that each of them is typically followed by a comma, just as you’d use a comma in, “for example, mid-cap and small-cap stocks.” Far too often I see i.e. or e.g. without any punctuation next to it.

I agree with Bryan Garner, who says in Garner’s Modern American Usage, “Although the abbreviation is appropriate in some scholarly contexts, the phrase that is or the word namely is more comprehensible to the average reader.” The same goes for using “for example” instead of e.g.

You want your readers to understand you, don’t you?

Garner has many publishers agreeing with him, according to Amy Einsohn’s The Copyeditor’s Handbook:

Many publishers allow the common Latin abbreviations (etc., e.g., i.e.) only in parenthetical references and in footnotes. Copyeditors working under this policy are expected to substitute for the abbreviation or delete it, depending on the context.

Try to avoid using these Latin abbreviations. But if you do use them, please punctuate them correctly.

MISTAKE MONDAY for September 3: Can YOU spot what’s wrong?

MISTAKE MONDAY for September 10: Can YOU spot what’s wrong?
Scroll to top