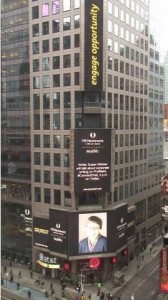 My headshot photo loomed larger than life on a Times Square Billboard on March 11, 2013. It was a rare moment of achieving what might be considered fame. But so what—what does this mean in the larger scheme of things?

How I made it onto the billboard

In the old days, you had to be a model or famous to make it onto a billboard. That’s no longer true.

My headshot photo went up on PRNewswire’s electronic billboard because I was featured the featured guest on its ProfNet unit’s Twitter chat for journalists. ProfNet doesn’t pay its guests, but it offers this unusual photo opportunity.

A big fat zero. That’s what the benefits of my Times Square photo would have been if I hadn’t shared the news via social media. After all, what are the odds that a prospect, client, or other interested party walked through Times Square and looked up at the billboard at the right moment?

I pumped out a link to my photo via Twitter, LinkedIn, and Facebook. I received many nice comments from my social media connections. In fact, people mentioned the photo in emails to me one month after it appeared.

Facebook is where the photo had the greatest impact. On my Investment Writing Facebook page, the photo had been viewed 647 times as of May 11, 2013. That’s huge for me.

What does this mean? Facebook views won’t pay my bills. They may not even bring me new clients or buyers for my new book.

Part of social media—and marketing—is throwing stuff out there to see what sticks. In the past, I’ve made connections that have taken as long as seven years to pay off. If my photo caught the eye of one person who becomes an advocate for me, perhaps it has done its job.