I recently spent almost three weeks in China. It was quite an experience.

Yakety-yak
Empty your cup of yak butter tea, if you don’t want a refill. Flick three drops of beer into the air before you drink–one for the Buddha, the next for the ancestors, and the third for guests. Take off your hat and sunglasses in Buddhist places of worship. These are bits of etiquette I learned in Lhasa, Tibet.

Yak butter tea was a bit salty for my taste, so I sucked it down to avoid a refill. Home-brewed barley beer was more to my liking. Barley is a staple in Tibet. Locals say that one bowl of barley is worth two of rice. A snack that looked similar to popcorn, served in the home of a middle-class Tibetan family, turned out to be popped barley. By the way, despite the middle-class designation, the house was modest. The grandmother would sleep in the kitchen during the winter for warmth. 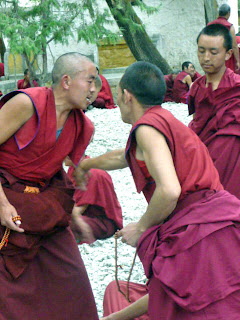 The most fascinating aspect of Lhasa was seeing Tibetan Buddhism in action. I was there during a holiday, so more people than usual were circling the pilgrimage sites and prostrating themselves, lying flat on the ground. Some of the people prostrating had pieces of plastic strapped to their hands to smooth their way as they raised and lowered themselves. I also saw monks debating. The closest I came to participating in religious activity myself was giving a heavy metal prayer wheel a spin as I walked by.

The smell of incense and melting yak butter will always remind me of the Potala Palace and other pilgrimage sites in Lhasa. At the palace, our group snaked through dark, narrow corridors viewing Buddhist paintings and statues, thrones, boxes filled with books inked in gold or silver, and especially magnificent tombs studded with turquoise, coral, pearls, and other precious gems. The ancient Buddhist observances contrasted with the modernity of armed men stationed on downtown streets. The tour guide warned our group not to photograph the army men or demonstrations.

By the way, if you ever go to Tibet, be prepared for altitude sickness. Also, watch out for the steep stairs in the Potala Palace. One member of my group fell down the stairs and broke his wrist.

Highlights
In addition to Lhasa, highlights of my trip included a Yangtse River cruise, where I saw misty mountain scenery reminiscent of the Chinese paintings I studied in my college art history class. Of course, the views look different since the Three Gorges dam raised the water level dramatically. The government plans to build 12 more dams upstream.

I also enjoyed Shanghai, where the number and diversity of skyscrapers–and the incredibly smooth ride to the 94th floor of the World Financial Center–contrasted with the serene beauty of the Ming-era Yu Yuan Garden.

As a long-time, though lapsed, student of the Japanese language, I was interested to see how the Chinese had simplified old-fashioned characters differently than the Japanese. For example, the den in denki, which means “electric” in Japanese looks different in both languages. I had fun trying to figure out the Chinese subtitles on English-language TV shows. But my ability to puzzle out some words on storefronts and menus didn’t help me with spoken Chinese.

Economic notes
China’s tourist economy is hurting. This year my guide is getting five tours from Viking River Cruises. Two years ago he got 10.  Also, Viking is only running one Yangtse River boat instead of two Of course, this may reflect U.S. conditions more than Chinese. However, I also heard that many of the cranes I saw had been idled. On the stock market front, my tour guide said that most Chinese believe their market will rebound because of China’s economic strength.

Censorship
The state-run China Daily newspaper skirted discussion of what many call the Tiananmen Square massacre in “China slams Clinton’s June 4 comments“(June 5). It led with “China Thursday expressed deep dissatisfaction and resolute opposition to US Secretary of State Hillary Clinton’s remarks on the 20th anniversary of the events of June 4.” But the paper didn’t quote Clinton’s remarks. Presumably they were too subversive.

On a related note, I wasn’t able to access my blog–or any URL containing Blogger.com or Blogspot.com–because those addresses were blocked. I met other bloggers who had similar experiences.