I am far from perfect in my knowledge of grammar, as I admitted in “Confessions of a grammar ignoramus.” So I wasn’t surprised to learn that I’ve been making a mistake when starting a sentence with “so.” Apparently, I shouldn’t have been putting a comma after “so” at the beginning of a sentence.

“So is a good word for beginning a sentence,” says Garner’s Modern American Usage because “The shorter word affords a brisker pace” compared with words such as “however,” “additionally,” or “therefore.” Garner doesn’t specifically opine on whether to use a comma, but none of his examples use one.

The Chicago Manual of Style calls for not using a comma in most cases when “so” begins a sentence. Please note its explanation of exceptions to this rule.

If you believe in using a comma after an initial “so,” you have some support. It’s a conjunctive adverb, so it must be followed by a comma, says Syelle Graves, in a guest post on “Is Starting a Sentence with ‘So’ Condescending?” on the Grammar Girl blog.

Both Microsoft’s grammar checker and Grammarly software flagged my lack of a comma after an initial “so” as a problem. However, both of those automated checkers make plenty of mistakes, as I’ve discussed elsewhere, including in “How I use Grammarly to improve my writing.” Moreover, note that the wording of Grammarly’s comment leaves open the possibility that you might not need a comma. 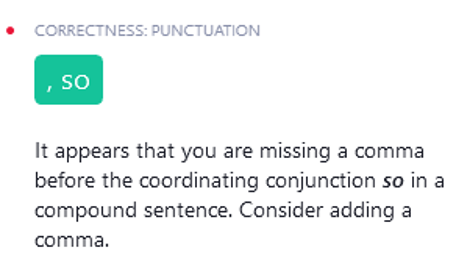 You can make a case for using or skipping commas in this situation. I’m starting to skip them because my clients are fond of multi-clausal sentences. I figure that fewer commas will make their sentences easier to absorb.