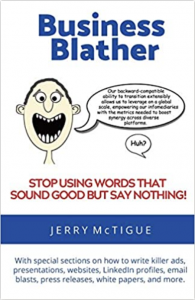 This blog post was inspired by a section in Business Blather: Stop Using Words That Sound Good but Say Nothing! by Jerry McTigue. As you know, I agree with the mission of this book.

In a section called “Enough with the platitudes already,” McTigue criticizes the “litanies of clichés and banalities writers believe exude a corporate luster simply because virtually every corporation proclaims them.” He adds, “Unverified off-the-shelf pronouncements are innumerable—as many bloated corporate documents attest to.”

In the world of financial advice, this means statements such as “We provide superior customer service.”

What’s the solution for this kind of writing? McTigue says, “Prove it. Illustrate it. Support it.”

In the area of customer service, do you have a case study documenting how your firm’s service truly goes beyond the ordinary? That’s a good place to start.

You may enjoy this book

Overall, McTigue’s book is an entertaining, easy-to-read book. It has many powerful before-and-after examples of bad writing transformed into effective writing.

Note: I received a free review copy of this book.

A letter quoted by Joseph M. Williams’ Style: Toward Clarity and Grace illustrates failures you can find in financial writing. His solution can also help financial writers.

Williams skewers his example of an automotive recall letter as “an example of how writers can simultaneously meet legal requirements and ignore ethical obligations.” What did the writer do wrong? Williams says, “The author—probably a committee—nominalized all the verbs that might make a reader anxious, made most of the rest of the other verbs passive, and then deleted just about all references to the characters, particularly to the manufacturer.” “Nominalization” means turning a verb into a noun.

Here are two sentences from his example to give you an idea of what he’s talking about:

A defect which involves the possible failure of a frame support plate may exist on your vehicle. This plate (front suspension pivot bar support plate) connects a portion of the front suspension to the vehicle frame, and its failure could affect vehicle directional control, particularly during heavy brake application.

Williams suggests the following new sentence as a partial replacement for the sentences above:

If you brake hard and the plate fails, you will not be able to steer your car.

Williams’ suggestion is much clearer than the original—and way scarier for the reader.

Let’s look at some of the original wording and his replacements to see the techniques Williams used.

Mutual fund prospectus example: before and after

I looked at fund prospectuses. In a quick search, I didn’t find anything as bad as Williams’ example.

Here’s one example with room for improvement:

Many emerging markets have histories of political instability and abrupt changes in policies. As a result, their governments may be more likely to take actions that are hostile or detrimental to private enterprise or foreign investment than those of more developed countries, including expropriation of assets, confiscatory taxation or unfavorable diplomatic developments. Some emerging countries have pervasive corruption and crime that may hinder investments. Certain emerging markets may also face other significant internal or external risks, including the risk of war, and ethnic, religious and racial conflicts. In addition, governments in many emerging market countries participate to a significant degree in their economies and securities markets, which may impair investment and economic growth. National policies that may limit the Fund’s investment opportunities include restrictions on investment in issuers or industries deemed sensitive to national interests.

You can simplify the emerging markets example to something like, “Emerging-markets investments are riskier than investments in developed markets because their governments have historically been less stable and more like to meddle in their economies and stock markets.”

Actually, to be fair, higher up on the page, the prospectus says, “The risks of foreign investments are usually much greater when they are made in emerging markets.” On the other hand, you could be even more direct by saying, “You have a greater risk of losing money when you invest in emerging markets instead of developed markets.”

Do YOU have a favorite poorly written disclosure?

If you have a great example of a poorly written financial disclosure, please share it with me. Perhaps it will inspire a future blog post.

Image courtesy of pakorn at FreeDigitalPhotos.net. 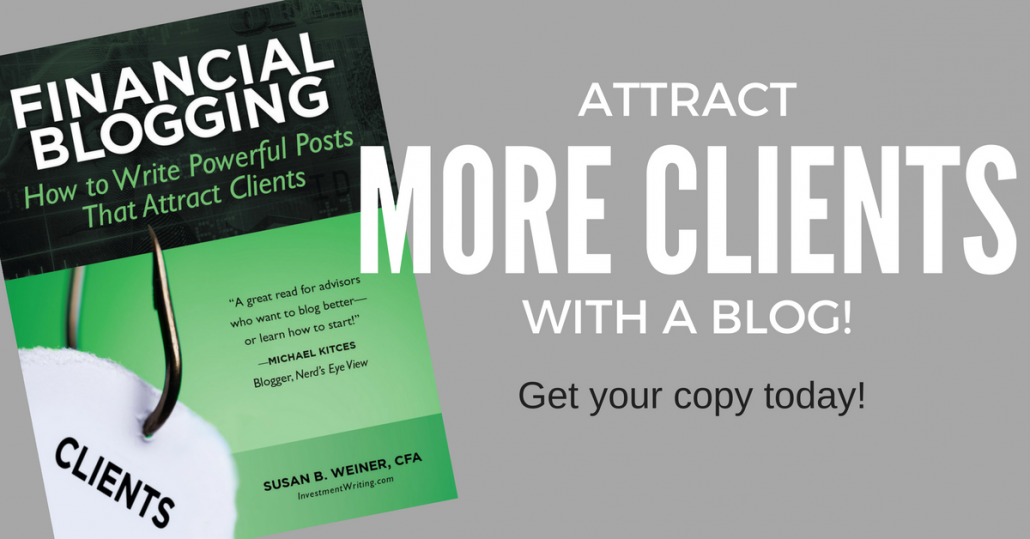 Click on the image or go to InvestmentWriting.com/book for details.