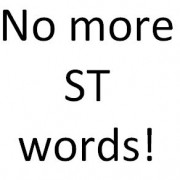 Looking for an easy tweak to simplify your firm’s writing? If your audience is American, stop using three prepositions: “amidst,” “amongst,” and “whilst.” Substitute “amid,” “among,” and while.”

Why bother making such a small change?

It will speed your reader’s progress through your writing. These words ending in -st are viewed as archaic in American English, says Bryan Garner in Garner’s American English. Amongst, for example, “is pretentious at best,” writes Garner.

Don’t distract your readers with archaic or pretentious words. However, if you’re writing for a British audience, consult a British style guide (you can find some listed in “7 British English Writing Resources.” Don’t push American style on your British readers, unless that style is part of your appeal.

NOTE: This post was originally published in November 2015. It has been updated and republished because it’s still relevant.

Working with a sensitivity reader
Scroll to top