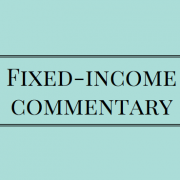 The survey also showed me what financial professionals think makes fixed-income commentary great. I’m grateful to my LinkedIn connections, including many professional investors, who shared their insights. I’m no bond geek, so I enjoyed learning from the professionals. Although survey participants were anonymous, I believe that many of the respondents come from among the fixed-income professionals whom I asked to take the survey.

The race for the #2 spot

Bill Gross of Janus Capital killed the competition in this survey. He racked up 50 percent of the vote. This doesn’t surprise me. After all, he’s one of the first portfolio managers whom most people think of when asked to name a fixed-income commentator.

My initial survey asked people to vote on a predetermined slate of candidates, which I’d collected via LinkedIn. But it also allowed for write-ins.

Below are the winners from among the names suggested for votes, along with comments that survey respondents made about them. I’ve included a link to what seems to be the best source of the investment commentary that my respondents enjoyed. I’ve also shared some of the respondents’ comments on the contenders. 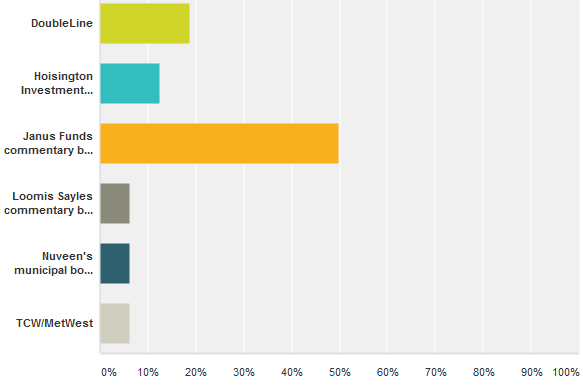 A number of people wrote in suggestions that weren’t included in the vote tally. I’m including their comments, when appropriate. I also include a link to what I believe are the online sources to which survey participants referred.

Explaining why they didn’t go with one of the big names, one respondent said, “In general I feel that [Doubleline’s Jeffrey] Gundlach and Gross ‘talk their book’ in their commentaries. They are good to read, but with a jaundiced eye (I am a fixed income guy!)” 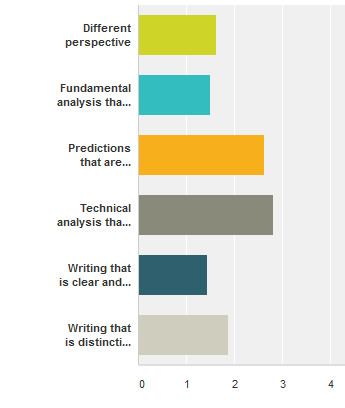 Next came “Writing that is distinctive and colorful.”

Lagging far behind were “Predictions that are accurate” and “Technical analysis that’s good.” As for accuracy of predictions, on respondent said, “I actually think it’s more important to understand their rationale (and agree or disagree) rather than merely accept anyone’s opinion as fact.”

Another factor, which I gleaned from comments on respondents’ favorite commentators, is that my respondents liked commentary that focused on the readers’ needs, rather than on promoting the firm or its investment strategies. That makes it tough for fund managers to excel.

Here’s my summary of what people said in their open-ended comments about what distinguishes great commentary about bonds:

The commentators whom I’ve discussed would be even better if they could clean up some issues with their writing and presentation, in my opinion.

Here are the annoying habits that I noticed as I viewed their writing samples.

You can improve YOUR investment commentary writing with my June 23 webinar.

Email and the mystery of the missing agreement
Scroll to top