What can an exhibit about the Civil War teach you about communications? I took away six lessons from “Torn in Two: 150th Anniversary of the Civil War,” which runs until Dec. 31, 2011, at the Boston Public Library’s map center. 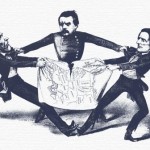 Torn in Two, an image featured in the Boston Public Library exhibit of the same name

Lesson 1: Summarize your message for people who don’t want to delve into details.

When I visited this map-heavy exhibit, I didn’t look closely at many of the maps. Instead, I happily read the large-type wall labels that conveyed each section’s theme.

Even though I’m a big reader, I wouldn’t have entered an exhibit that consisted solely of words. In fact, it was the exhibit’s signature image of two men tugging on opposite sides of a map that attracted me.

My favorite part of the exhibit was “Hear Our Stories,” featuring 10 fictional characters describing their lives at each stage of the Civil War.

Lesson 4: Appeal to your audience’s demographics.

The variety and specifics of the characters was compelling. To give you some flavor, they included

However, I was disappointed to learn later from a brochure that these were fictional characters. The lesson for financial bloggers? Make it clear if you’re using composite characters to illustrate a story.

Lesson 5: Help your audience relate your information to themselves.

I picked up a family activity brochure about slavery at the exhibit. It started by suggesting questions for adults to ask children, such as, “Are you allowed to read?” These questions put the children at the center of the conversation, in addition to providing context for an adult-child discussion of how slaves had few choices.

Lesson 6: Write about your passions.

I suspect that the creators of this exhibit felt excited about their topic. This passion, plus adept use of Lessons 1 through 5 sparked an interesting exhibit.