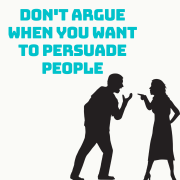 Political divisions in America have me thinking about how to speak with people with whom I disagree. This is personal. I have an aunt with whom I can’t talk politics. As a result, I was intrigued by the chapter called “Don’t Argue” in Trish Hall’s Writing to Persuade.

Hall makes a case against arguing with people with whom you disagree. She says, “Intriguing studies suggest that when faced with aggression, people don’t change their minds. They hold even more fiercely to what they believe.” I believe she’s referring to heated arguments, rather than logical exchanges about low-stakes issues.

“This Article Won’t Change Your Mind,” an article in The Atlantic, says that people try to avoid cognitive dissonance—the discomfort of holding two thoughts that conflict. “There are facts, and there are beliefs, and there are things you want so badly to believe that they become as facts to you,” writes author Julie Beck. This is especially true about a “belief that’s deeply tied to your identity or worldview” so it leads to “motivated reasoning,” according to Beck, who writes:

Motivated reasoning is how people convince themselves or remain convinced of what they want to believe—they seek out agreeable information and learn it more easily; and they avoid, ignore, devalue, forget, or argue against information that contradicts their beliefs.

Hall says that arguing is sometimes “performing,” in which the actors don’t expect to change minds.

Hall says that if you want your listeners or readers to be open to changing their minds, do not do any of the following to your audience:

Do this instead of arguing

“Always concede the good points of the other side. What you want is to be heard, not to win every outing,” says Hall. She also recommends that you:

Hall’s chapter includes an example of how she used her suggestions to navigate a touchy political topic with her mother. I’m not convinced that she changed her mother’s mind. However, it appears that at least they were able to talk without raising their voices and getting angry at each other. That allows for an ongoing relationship. And, perhaps, opinions will change over time.

Will you argue less?

As I write this blog post, I’m mulling over how I might try Hall’s advice on my aunt.

If you try these techniques, I’m curious to learn if you get good results.