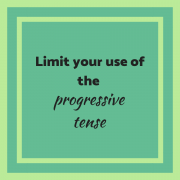 I’m not a fan of adding -ing to verbs, as I’ve said in “The ‘Be” test for writers.” However, I couldn’t tell you why it was wrong until I read Cut It Out: 10 Simple Steps for Tight Writing and Better Sentences by Laura Swart.

Here’s how Swart explains the use of what she identifies as the “progressive tense.”

…unless something is happening right now or over a period of time, use the simple present and simple past tenses (typically verbs ending in s and ed, respectively).

There’s some ambiguity in how to apply that rule. That’s why I like that Swart’s book provides multiple examples of when to use or omit the progressive tense.

However, I use a simpler rule. Does the sentence make sense if I don’t attach -ing to the verb? If so, I omit it. Shorter sentences are easier for readers to absorb.

What appears to be the progressive tense may actually be a gerund. That’s a noun formed by adding -ing to a verb. Grammarbook uses the example of “Walking is great exercise.”

Grammarbook also says, “It is helpful to recognize gerunds because if a noun or pronoun precedes a gerund, it is usually best to use the possessive form of that noun or pronoun.”

MISTAKE MONDAY for May 13: Can YOU spot what’s wrong?

MISTAKE MONDAY for May 20: Can YOU spot what’s wrong?
Scroll to top