I learned in high school English to form the possessive of a word ending in the letter s by adding only an apostrophe. According to this rule, the workers of Degas should become Degas’ workers. 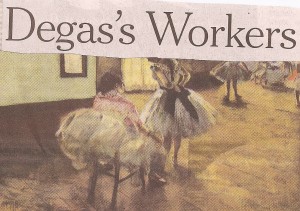 But times have changed. Today many people and organizations don’t observe the apostrophe-only rule. Not even The New York Times, where I spotted “Degas’s.”

Leave off the s for the possessive

Grammar Girl says opinions are divided, but she prefers to leave off the s.

Here’s what my old AP style guide says about the possessive and singular common nouns ending in s:

In another complication, the Purdue Online Writing Lab (OWL) says:

I think the AP and OWL recommendations are too complicated. Let’s keep things simple! However, if you prefer different rules, it’s okay as long as you apply them consistently. Consistency will make it easier for your readers to process what you write.

Click here to view the newsletter archive
Make your writing easier with my fill-in-the-blanks approach for structuring...