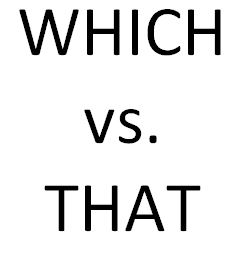 Writers often use “which” when they should use “that.” The reverse is also true. It took me a while to learn this myself. This post offers some guidance on your choices.

“That” is for essential clauses. The sentence doesn’t make sense without the clause.

Omit “that rises rapidly” and you get “Inflation may hurt bond prices more than gradual inflation.” Does that make sense? No! Thus, “that” is required to reflect the presence of an essential clause.

“Which” is for nonessential clauses and requires at least one comma.

Inflation was rising rapidly, which was inflicting pain on bond holders.

Delete “which was inflicting pain on bond holders” and you still have a sentence that makes sense: “Inflation was rising rapidly.”

The British have different rules for the use of “which” and “that.” As Shea Ammon states in Bad English: A History of Linguistic Aggravation, they use both for essential clauses. However, they agree with Americans on using “which” for nonessential clauses.

Note: The title of post was edited on Feb. 24, 2015, when I learned that “that” and “which” may not be considered pronouns in this context.

Should your investment commentary be different?

Should you link to others in your blog?
Scroll to top