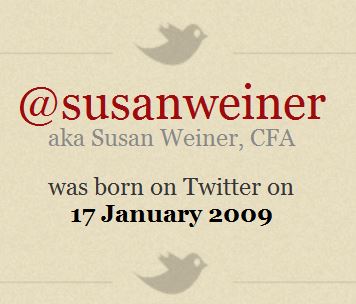 I’m astonished to find myself celebrating my fifth birthday on Twitter. On the one hand, it feels like just yesterday that I joined Twitter. On the other hand, it’s hard for me to imagine life without Twitter.

I joined Twitter reluctantly. It seemed as if all of my writer friends were buzzing about it, but I didn’t want to add another form of social media to my busy life.

At first, Twitter struck me as stupid. There were so many short, disconnected snippets of information. And the volume was overwhelming.

However, eventually I figured out that I didn’t need to read every tweet. I started using HootSuite to filter tweets. I also started interacting with Twitter users, as I described in “Why I like some tweets more than others–and the lessons for you.”

I had a “Twitter moment” when I spoke at the Financial Planning Association’s FPA Experience conference about writing more effective emails. Thanks to my Twitter friends, my session was one of the more heavily tweeted sessions, despite its being scheduled early on the first day of the conference. Even better, I met people who felt as if they knew me, even though they’d only seen me on Twitter. For an introvert like me, it’s an enormous relief when people come up to me instead of my needing to tackle them.

My experience with Twitter reminds me that I need to keep trying new things. Just because something is unfamiliar doesn’t mean it’s bad.

If you’re not yet on Twitter—or you’re still trying to figure it out—you may find these posts helpful:

Asking reporters to send questions in advance
Scroll to top