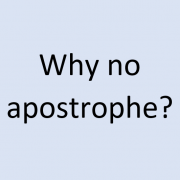 I’ve long wondered why there is no apostrophe in words like “writers room,” ‘homeowners association,” or “teachers college.”

Is the noun descriptive or possessive?

I found a good explanation in Emmy J. Favilla’s A World Without “Whom.”

Do not use an apostrophe when a word is primarily descriptive rather than possessive…. The word is acting more like an adjective than a possessive noun.

Grammar Girl agrees with this approach in her post on “Apostrophes.” Here’s how she explains the lack of an apostrophe in farmers market:

Exception for nouns that don’t end in s

There’s a word for these nouns that act as adjectives. They’re “attributive nouns,” according to Amy Einsohn in The Copyeditor’s Handbook.

And here’s a twist in the use of punctuation with attributive nouns. “If the plural form of the head noun does not end in s, however, the apostrophe is always used: the people’s republic, a children’s hospital,” says Einsohn.

English grammar sure is complicated.

Click here to view the newsletter archive
MISTAKE MONDAY for Aug. 6: Can YOU spot what’s wrong?

MISTAKE MONDAY for Aug. 13: Can YOU spot what’s wrong?
Scroll to top