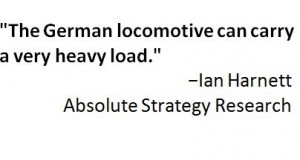 according to Ian Harnett, managing director for European strategy at Absolute Strategy Research (ASR), a London-based macroeconomic research firm. He made his comments during “Europe: ‘This could be Heaven or this could be Hell,’ ” a March 17 presentation to the Boston Security Analysts Society.

More reasons to favor cyclicals include the following:

Europe’s woes have both structural and cyclical elements, said Harnett. However, he said, fiscal deficits such as we’ve seen recently are nearly always cyclical rather than structural. Harnett made his point with a graph showing the correlation between “Budget Balance as a % of GDP” and “Industrials Hiring Intentions.” “This has been a jolly good indication of deficits until now,” he added. “Europe’s woes are more ‘cyclical’ than ‘structural,’ ” he concluded.

Investors are moving into “safe havens,” such as Germany, at the expense of Europe’s peripheral countries, Harnett said. As a result, the core countries of Europe are paying an inappropriately low cost of capital. German consumer confidence is at record highs, so they are spending.

“The German locomotive can carry a very heavy load,” said Harnett. German excess demand is being funneled to Europe’s peripheral countries. Germans are vacationing abroad and buying peripheral countries’ exports. Trade imbalances within the euro zone are shrinking. Eventually, banks will benefit, especially in the peripheral countries, assuming they survive the current turmoil. ASR is currently very long on European peripheral banks and neutral on the banks of core Europe. Harnett added that he expects ASR’s next move will be to overweight core banks.

The euro is a political creation, so politicians will ensure its survival, according to Harnett. So your investment strategy shouldn’t bet against the euro, if you agree with ASR’s opinions.