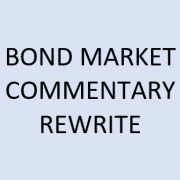 The best bond market commentary is written so its writing style doesn’t interfere with readers’ understanding of the content.

Here’s a screen shot of some bond market commentary that I received via email in November. It could use some help. (By the way, I’m not out to embarrass anybody. Before I started critiquing this piece, I googled the text to make sure the author couldn’t be identified easily.) Let’s analyze and rewrite this piece. 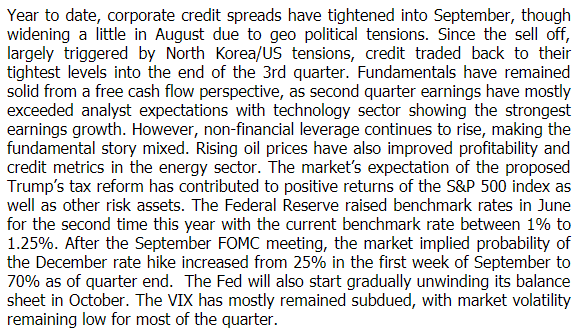 One good thing about this commentary is that it was published promptly after the end of the quarter. Most commentary takes days if not weeks to get published. The speedy production cycle probably meant the author didn’t have lots of time to process his or her ideas. Nor was there much time for editing or proofreading. It’s not easy to pump out clean commentary under these circumstances.

Let’s look at the commentary’s weaknesses.

Note: I give a pass to this commentary for using technical language, such as “credit,” “risk assets,” and “FOMC” because this commentary is aimed at practitioners. It’s fine to write in the language of your audience. In fact, it’s appropriate, as long as you don’t expect regular folks to understand you.

My thoughts about how to rewrite this piece

The main change I’d make to this piece is to reformat it. I think this piece was intended to provide some quick information without building a bigger argument, so I’m not writing an introduction or strong topic sentences. I am, however, adding bullet points and headings.

I don’t follow the bond market closely so I may make some factual errors in my rewrite.

I raise some questions about the content in red text.

Click here to view the newsletter archive
Blog post headings vs. no headings for your financial blog

Narrower is better for social sharing
Scroll to top