Marketing communications consultant Susan Becker and I met through LinkedIn. I’ve enjoyed many exchanges with her about how to communicate more effectively. Her guest post focuses on making the most of charts. 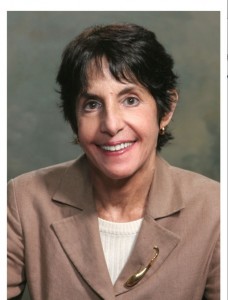 Unfortunately, in communicating visually, we often tend to sacrifice the verbal interpretation necessary to make the data easily understood. This post discusses two techniques to remedy the misleading assumption that “the numbers speak for themselves.” They result in charts that engage your audience and advance the story revealed in your data.

I should point out that this post discusses investment writing using text with charts. We should design for the medium, so the suggestions here would be modified for a slide presentation that is projected or web-based.

Marketwatch interactive charts offer abundant choices for presenting data. The chart below compares a stock’s 12-month stock performance against the SPX and DJIA.

Use the interpretive title that furthers your message. For example, if your story focuses on ROI, you would want a title explaining “Stock X’s performance turned negative in March and continued to diverge from the indexes, ending the  year deep under water.”

2. Use interpretive labels and call-outs

Verbally signaling key data is another useful technique for the text-and-charts format, which accommodates more visual elements than slides projected during a presentation. The chart below tells the story of a web industry segment’s roughly one-year wild ride, 3Q99 through 4Q00, in a simple line chart made eloquent by interpretive notes. 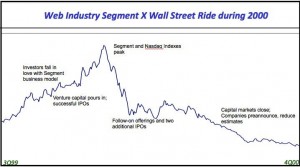 If you have less white space, overlay the text in call-outs (click “Shapes” in Word and PowerPoint).

Susan K. Becker provides consulting and coaching in marketing communication and presentations at Manhattan-based Becker Consulting Services. View her work at http://www.slideshare.net/SusanKBecker and follow her on Twitter @SKBeckerCoach.