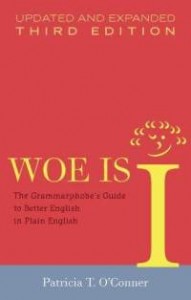 If you’ve ever worried whether to use “which” or “that” you’re not alone. It took me years to figure out. However, Patricia O’Connor lays out the rules nicely in “The Which Trials” section of her book, Woe is I: The Grammarphobe’s Guide to Better English in Plain English.

Here are O’Connor’s rules from page 3 of her book.

I grabbed a sentence from a John Mauldin commentary to illustrate O’Connor’s rules for using which. In “A Player to Be Named Later,” he wrote, “The carrot is 1% financing for your banks, which can then buy your bonds at 4-5-6% (depending on the country).”

Which is proper in this sentence because the following sentence makes sense: “The carrot is 1% financing for your banks.” Mauldin properly places a comma before the start of the which clause.

You’ll find more on these rules in “Which Versus That” by Grammar Girl Mignon Fogarty, one of my favorite online grammar resources. For a more technical explanation, see “Introduction and General Usage in Defining Clauses” on the Purdue Online Writing Lab site.

By the way, I wish Mauldin hadn’t capitalized “Summit.” But that’s a whole other issue, which I’ve explored in “Do you use ‘pride capitals’?”

Woe is I is a fun read

I recommend O’Connor’s Woe is I as a fun read. Plus, you may learn something from it. I know I did. I’m glad I learned about it from a post on the Copyediting Facebook page.

Click here to view the newsletter archive
Guest post: “Boost Chart Impact with Interpretation”POLL: When is it okay to write “equity market” instead of plain English...
Scroll to top