The Firefox browser’s spellchecker keeps tagging “outperformance” as a typo. I feel very annoyed when this happens because I 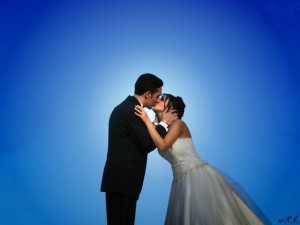 The case for “outperformance”

Here’s the evidence in favor of marrying “out” and “performance” so they’re one word:

The case for “out-performance” with a hyphen 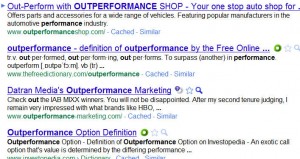 Results of my spelling poll

When I polled my newsletter and blog readers about the proper spelling, “outperformance” won in a landslide, with 92% of the vote. Here are the results:

Note: I updated this piece on December 1, 2013, to share the results of my poll, instead of directing readers to a poll that’s no longer active. This post originated as a request for readers to respond to a poll.

You can’t rely on automated spell checkers. They won’t catch all of your typos. 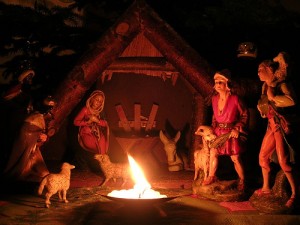 You can use the proofreading methods in “Six ways to stop sending emails with errors” to complement your spell checker.

Can you identify the error?

The picture shows the subject line of an email that I’ve edited to hide the identity of the guilty typist. It includes the kind of error that a spell checker won’t catch. Even Microsoft Word’s grammar checker didn’t catch the typo when I tested the complete sentence.

Proofreading is essential, if you want to avoid embarrassing yourself in your financial blog or other written communications. Tips for effective proofreading are included in my blogging class.

If you think typos don’t matter, read some of the comments this typo drew from my social media friends.

In case you couldn’t identify the error

The subject line should have read “See who’s speaking this fall….”

Gosh, I hope I didn’t let any typos slip through in this post.

How should you spell the word that may appear in descriptions of an asset management firm’s minimum requirements for clients– “investable” or “investible”?

My gut tells me “investable” with “a” because the definition depends on how much you are able to invest.

The case for “investable” over “investible”

The case for “investible” over “investable”

The SEC is a draw

A search of the SEC website yielded an equal number of results for both spellings. I wonder if they use both as key words for search purposes.

Note: I updated this blog post in 2015 to delete an outdated reference to an inactive poll.

…you may also enjoy my free monthly e-newsletter with practical tips for your client communications. You’ll also find at least one investment or wealth management article.

I often report on presentations to the Boston Security Analysts Society, so you know you’ll see topics of interest to CFA charterholders.

Topics in the May 2010 issue included

What’s the right way to spell the plural of Treasury, as in U.S. Treasury bond?

Should it be “Treasurys,” following the rule that the members of the Murphy family become Murphys? Or should it follow the normal rules of creating plurals for words that end in the letter y?

I panicked when I saw “Treasurys” in The Wall Street Journal. Eek! Have I been spelling the word wrong for 20-odd years?

However, I quickly discovered that opinions are split. When I Googled the terms, there were 2.2 million results for Treasuries vs. only 1.5 million for Treasurys.

The evidence for Treasuries
Here’s the rule that would typically apply. “…if a word ends in a -y that isn’t preceded by a vowel, the plural is formed by omitting the -y and substituting -ies…,” according to Garner’s Modern American Usage. Garner makes an exception for proper names ending in y. He agrees that Murphy becomes Murphys.

My friend, financial editor Harriett Magee, found that sources including the Barron’s Dictionary of Finance and Investment Terms agreed with Treasuries. Plus, her spell-checker flagged Treasurys as a mistake.

If you prefer Treasurys…
You’ve got some high-powered company if you stick with Treasurys. When The Wall Street Journal spells it that way, that legitimizes it in my eyes.

If you can’t bear not knowing what’s 100% correct, then use the workaround that Harriett Magee suggests. Refer to Treasury bonds, Treasury notes, and so on. It’s bit wordy, but correct.

Follow this advice, no matter what you decide
It’s important to use your words consistently in your corporate communications. Pick one spelling and stick with it.

Consider creating a corporate style guide that lists preferred spellings. It’s a lot easier to have an authoritative source for your company than to try to keep the rules in your head.

My thanks go to David Glen, senior vice president at Boston Private Bank, for raising this question.

Then you’ll probably enjoy “Ten Words You Should Stop Misspelling” from TheOatmeal.com. I couldn’t stop laughing.

I discovered this through Twitter. This isn’t a business reason to participate in Twitter but a little laughter helps every now and then.