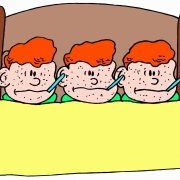 Which is correct—“I feel bad” or “I feel badly”—when asked “how do you feel?”

I know “bad” is an adjective and “badly” is an adverb. However, I wasn’t sure which was correct in this case. So, I was interested in the entry for “Bad, badly” in Theodore Bernstein’s The Careful Writer: A Modern Guide to English Usage. Would it clarify the conflict of bad vs. badly?

Bernstein’s take on bad vs. badly

Bernstein says “bad” is correct because “’Feel’ is a copulative verb, equivalent in meaning to ‘am,’ and therefore is followed by an adjectival form (bad), not an adverbial form (badly).”

Copulative verb? I don’t remember hearing that term before.

I turned to Garner’s Modern American Usage for his take. Garner says, “When someone is sick or unhappy, that person feels bad—not badly. In this phrase, feel is a linking verb, which takes a predicate adjective instead of an adverb.”

Predicate adjective is another unfamiliar term. But, I’m relieved to find that Bernstein and Garner agree on “feel bad.”

Garner cites a number of cases where major newspapers incorrectly used “feel badly” instead of “feel bad.” So, if you sometimes use the wrong form, you have company. (However, if you ever read my Mistake Monday posts, you know that newspapers make plenty of mistakes.)

Garner’s “Language-Change Index” estimates that the incorrect use of “feel badly” is at Stage 2, in which “The form spreads to a significant fraction of the language community but remains unacceptable in standard usage.” (My copy of Garners dates back to 2009. The stage may have changed since then.)

Now, how do you feel?

MISTAKE MONDAY for February 24: Can YOU spot what’s wrong?
Scroll to top