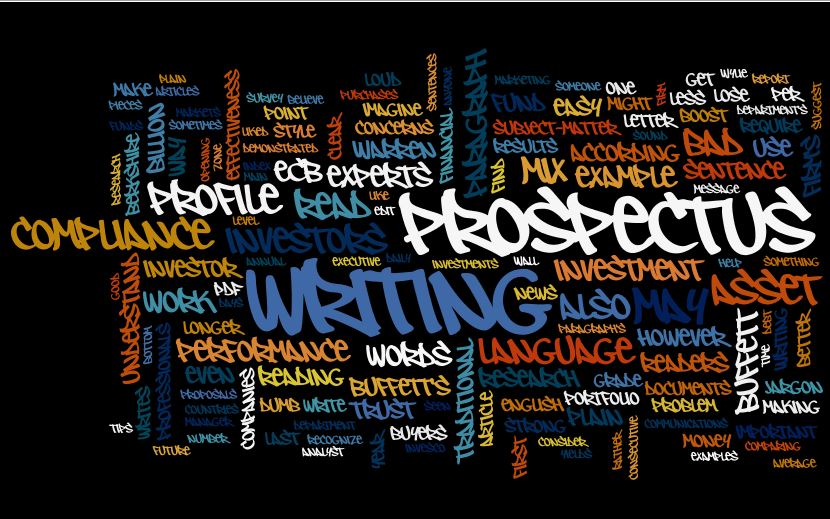 Have you ever struggled to get your colleagues, bosses, or clients to accept plain English and good writing?

You have lots of company. It’s not easy to win over people who are used to a different style of communication. This is what spurred me to write “Seven Ways to Talk Your Financial Execs Out of Jargon and Bad Writing,” which appeared on the MarketingProfs blog.

In that post,you’ll find my seven best tips for persuading your authors to rethink their writing style. My examples are tailored to the world of investment and wealth management. Check it out!

My discussion of Warren Buffett in my post on MarketingProfs sparked discussion. I like the following comment by Wayne Buckhout, executive vice president at CTC Investor Relations:

I’ve used Buffett many times in the ways you suggest. The usual retort is something like, “If I had Warren’s money and job security, I could write like that, too.” My rebuttal is usually along these lines: “Let’s assume, for a minute, you have both. What would you say that you’re not saying now, and how would you say it?” I’ve been amazed at how many of their candid, “If I were Warren” comments make it into the final product.

Buckhout also shared one of his techniques for managing the approval process  with an eye to supporting the use of plain language:

If you write in the name of a company, rather than an individual, one person in the approval chain is usually a far better writer and editor than the rest, and it’s often the highest ranking member of the group. I have learned through painful experience, however, not to try to short-circuit the process by slipping a first draft only to that person, even if it’s the CEO. What works, however, is to have a private talk with that person, acknowledging the relative value of his or her input, and telling them that you understand that collaboration is part of developing the others in the group. That gives you a strong advocate in their discussions that don’t include you, and more cooperation from the rest, which typically includes the person who hired and pays you.

I agree with Buckhout that the support of a senior executive can be invaluable.

This blog post was updated on Oct. 28. I added new material.

Quote of the day on keeping it simple
Scroll to top