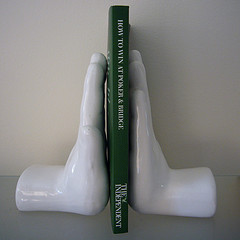 Plain language makes your documents more appealing and easier to understand. But circumstances may require you to use jargon. For example, you may be a financial marketer or professional working for bosses or departments that insist on using technical or unfamiliar terms.

You can help reader comprehension by explaining the term in the sentence where it first appears. Parenthetical explanations are useful, whether you literally enclose the explanation in parentheses or set it off using some other technique.

“We are in a Goldilocks-like age at the moment,” said asset manager Jack Flaherty, referring to markets perceived as not too hot and not too cold—just right.

Goldilocks is a colorful image for readers who grew up with the story of Goldilocks and the three bears. However, it has a specific meaning in a financial context, so it demands explanation. Otherwise, the reader may wonder if “Goldilocks-like” refers to folks who wander into other people’s houses or try out different beds.

One classic approach to explaining technical terms is to use the term and then add an explanation that’s set off between commas. Here are examples:

Another approach is to start with the plain language and then add the technical term or nickname, as in the examples below:

When possible, it’s great to avoid using the technical term. I bet nine out of 10 financial experts would have used the term “spread” in the following sentence: “Investors have flocked to the $1.6 trillion junk-bond market in recent years, attracted by the income the bonds paid above debt perceived as safer issued by investment-grade companies at a time of historically low interest rates.”—The Wall Street Journal (July 25, 2014)

By the way, if you need help talking your executives into using plain language, check out my MarketingProfs article on “Seven Ways to Talk Your Financial Execs Out of Jargon and Bad Writing” (registration required).

Avoid this option: Enclose the explanation in parentheses

Did you expect me to recommend the use of actual parentheses? I didn’t find any good examples of parentheses usage in The Wall Street Journal. Actual parentheses can be distracting, as explained in “Better writing without parentheses,” by my friend Harriett Magee.