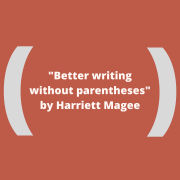 Parentheses are overused in financial writing. Here’s a guest article about them by Harriett Magee, a writer-editor who specialized in alternative investments. Her article originally appeared on Jan. 27, 2008, on one of my earlier blogs. It’s still relevant, so I’m sharing it here.

Parentheses (like all punctuation) can hurt (and help) most writers (maybe even all) in getting their point across to readers.

Readers may find such marks annoying, like in the previous sentence, because they interrupt the flow and weaken the message with irrelevancies. And while most readers don’t count words in sentences, parentheses often result in long sentences, which tire and confuse readers. (The ideal sentence length is 15–20 words.) To get your message across, use parentheses sparingly.

For writers, parentheses can seem like a lifesaver because they offer a home to data and show you’ve done your homework. They’re ubiquitous in research reports. Writers may also use them as a way to repeat information to drive the point home. For example, “The $750 million Big Ideas Venture Fund II was allocated roughly half to early- and to late-stage life science investments (49% and 51%, respectively). Fund III, however, had only about a tenth of capital ($75 million) invested in one early-stage investment.” But readers will get the point faster if you leave out numbers.

When writing about investments, often the urge to insert alternative metrics can be satisfied by putting the data in a graph. For example, give the prospective investors in the $2 billion Big Ideas Fund IV a bar graph showing the shift in allocations to young vs. more-established companies. A bar graph would accomplish two things: provide variety by breaking up the text with a picture, resulting in more white space to give the eyes a rest, and provide alternative metrics for people, especially those who want more detail.

I love Harriett’s idea of moving the parenthetical information to a graph. It’s a great way to boost the visual appeal of your writing. At the same time, it makes the text easier to read.