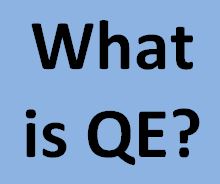 “Quantitative easing” pops up regularly in economic and market commentary. The term conveys a lot to financial professionals who know the fine points of QE3 vs. QE1. However, it’s likely to make the average American say, “Huh?”

This is why I suggest that you learn from newspapers when you discuss quantitative easing—or other technical terms—in your communications aimed at ordinary folks. I found three techniques in recent articles.

Sometimes newspapers avoid the topic entirely, even when it’s relevant. For an example of this, see “U.S. Economy Grew 1.7% During the 2nd Quarter, Topping Forecasts” in The New York Times, which simply refers to the Fed’s “huge stimulus efforts,” which, of course, include more than just quantitative easing. You should consider this technique, too, if the details of the Fed’s bond purchases aren’t important to your discussion.

Technique 2: Discuss the topic, but skip the technical term

Another technique is to describe quantitative easing in general terms, as in the following New York Times headline: “Bond Purchases by Fed Will Continue, at Least for Another Month.” The article described the Fed’s adding “$85 billion a month to its holdings of mortgage-backed securities and Treasury securities.”

Other references in the article included:

In many cases, these descriptions provide enough detail for your readers.

Technique 3: Use the term, but explain it

The term “quantitative easing” didn’t surface until close to the end of the Times‘ “Bond Purchases” article, with the following sentence:

Other economists, including Lawrence H. Summers, a leading candidate to succeed Mr. Bernanke, have expressed similar concerns about the purchases, which go under the label “quantitative easing.”

Because the article had described the purchases earlier, it didn’t explain them in detail in the sentence above. If this sentence were the article’s first reference, the author could have included an explanation something like the following:

What’s right for you?

Ask yourself whether your readers need to see the term “quantitative easing.” Perhaps it’s enough for them to be aware of “the Fed’s bond-buying program.

If you’re writing for a mixed audience of regular folks and investment professionals, you may choose to use “quantitative easing.” However, I suggest in that case that you define it on first use and put the term in context, as I did in my discussion of “Technique 3.”

Do you use “quantitative easing” everywhere, avoid it entirely, or mix it up?

Need hands-on help with your commentary?

I can write your commentary based on interviews with your investment professionals or based on attribution analysis and other materials provided by you. I also edit commentary you’ve written to make it more compelling and reader-friendly.

If your budget is limited, hire me to evaluate your newsletter and suggest improvements that you can implement yourself.

Follow the virtual book tour for Financial Blogging: How to Write Powerful Posts...
Scroll to top