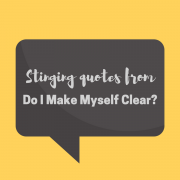 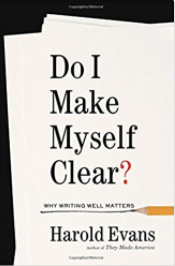 Harold Evans wrote some great lines against bad writing in Do I Make Myself Clear? Why Writing Well Matters. Here are some of them, organized by topic.

If you can avoid making the mistakes he highlights, you can live up to his statement that “Good writers breathe a kiss of life into old dead facts.”

I love the term “pussy footing passive,” which you’ll find in the section on the passive voice.

“When you write in the passive voice, you can’t escape adding fat any more than you can escape piling on adipose tissue when you grab a doughnut.”

However, Evans admits there are times when the passive voice is necessary. These cases include when the actor isn’t known, when the identity of the receiver of the action isn’t known, when the writer wants to conceal the actor (also known as the pussy footing passive, according to Evans’ citation of Edward Johnson), and when otherwise the verb would follow a long subject.

“Express even a negative in positive form…it is quicker and easier to understand what is than what is not.”

Emphasize the impact on people

“Eyes that glaze over at ‘a domestic accommodation energy-saving program’ will focus on ‘how to qualify for state money for insulating your house.’”

“The circumlocutory preposition is a fluffy substitute for a single preposition which gives the meaning as clearly. The grossest offenders are in the field of, in connection with, in order to, in respect of, so far as…is concerned.“

“The people who create and run companies aren’t stupid, but they put their names to statements that are management mumbo-jumbo, products of algorithms rather than thinking human beings.”

Click here to view the newsletter archive
MISTAKE MONDAY for March 19: Can YOU spot what’s wrong?

MISTAKE MONDAY for March 26: Can YOU spot what’s wrong?
Scroll to top