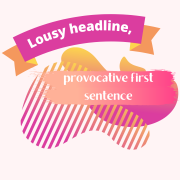 I nearly didn’t read an interesting article about stocks in The New York Times.

The problem of a lousy headline

I nearly skipped the article because of the bland headline: “An Ear to the Ground on Stocks.” The article could have been about anything. Perhaps college students who pick stocks for a class. An investment club. A well-known equity portfolio manager. But the real topic was more intriguing. What a shame that the lousy headline prevented some readers from discovering it!

The first sentence of this article by Mark Hulbert grabbed my attention. It said, “Investor sentiment suggests that the bulk of the stock market’s decline is now behind us.” Now that’s provocative. The author takes issue with what most people think. That should have been communicated in the article’s headline. What if the title had read, “Data suggest the worst of the stock market decline is over”?

I also like how Hulbert summarized his argument–and set up the structure for the rest of his article–in his next paragraph:

This conclusion is based on an analysis of two very different groups. The first is investment newsletter editors, who, on average, are usually wrong about the market’s direction; they are currently bearish. The second is corporate insiders, who usually get it right, and they are mostly bullish

Writing lessons from this article

For example of a provocative headline, visit this post about Treasuries on my blog.

NOTE: This blog post was originally published in 2008 on one of my earlier blogs. But it’s still relevant today, so I’m republishing it.