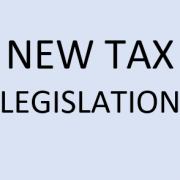 If you’re an investment or wealth manager, you and your clients will be affected by the tax legislation signed by President Trump on December 22, 2017.  You probably need to mention the legislation in your quarterly client letter or commentary. I think the language that you use to refer to the legislation will be important.

Your choices for how to refer to the tax law fall into three categories, as I see it.

What advisors and writers recommend

When I asked about on social media about writers’ choices, respondents preferred neutral language. Their suggestions included using the tax legislation’s official name. Financial writer Lisa Plotnick said,  “I refer to it by name for two reasons — to be neutral (as per my journalism training) and to make it easier for future readers to know the exact bill being referred to (the researcher in me).”

Yet another respondent suggested that a firm’s compliance officer might flag your commentary if you use partisan language in discussing the legislation.

The risks stem from the fact that people feel strongly about the topic. If you seem to endorse or oppose the law, you may alienate readers.

On the other hand, if your clients and prospects are mainly in one camp or the other, partisan language may make your readers feel a deeper sense of connection with you. You sacrifice that opportunity, and perhaps lose authenticity, if you don’t use language that expresses your positive or negative views.

As you may remember from “Financial jargon killer: The Wall Street Journal,” I suggest looking to newspapers for guidance on matters of writing style.

For example, a Wall Street Journal article published on Dec. 22 uses neutral language, but doesn’t use the law’s official name. It said, “President Donald Trump signed the 21% corporate tax rate into law Friday and Democrats are talking about which pieces of the bill they will keep and which they will toss aside should they assume power” (emphasis added).

In a quick scan of the Journal‘s website, the bill’s name seemed to appear more in opinion pieces and reports on the legislative process than in news articles. That may be because the name “Tax Cuts and Jobs Act” is more agreeable to Republicans than to Democrats. Or perhaps it’s to save space because, as I said above, you need to describe what the act is if you use its official name.

On the website of The New York Times, a Dec. 22 Reuters article didn’t use the legislation’s formal name. Instead, it initially referred to “the biggest overhaul of the U.S. tax code in 30 years.” However, later it used the positive term “tax reform” and referred to the “Tax Cuts and Jobs Act” in discussing Mallinckrodt’s filing discussing the legislation.

I’m curious. How will you refer to the tax legislation in your next client communication?

Abbreviation: U.S. or US for United States?
Scroll to top