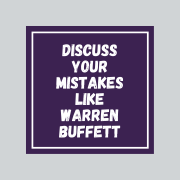 Benefit of discussing your mistakes

“These public postmortems may not reduce the number of his mistakes—he is human—but he is less likely to repeat them,” says Rittenhouse.

How to discuss your mistakes

Buffett is a big fan of using plain language in writing about financial topics. He speaks plainly about his mistakes. Referring to Dexter Shoe Company, he wrote, as quoted by Rittenhouse,”To date, Dexter is the worst deal that I’ve made. But I’ll make more mistakes in the future—you can bet on that.” You can’t get plainer than that.

Buffett uses some humor in discussing his mistakes. For example, says Rittenhouse, “He described his biggest all-time blunder in his 2007 letter in a reference to a Bobby Bare country western lyric about going to bed with good-looking women and waking up to find they are ugly.” I think that putting down women’s appearance risks offending today’s readers. However, the use of analogy is a powerful technique.

It’s safer to poke fun at oneself. Buffett described his failure to do a big deal, saying, “The only explanation is that my brain had gone on vacation and forgotten to notify me.”

I’ve discussed the importance of discussing mistakes in “Four lessons from Wasatch Funds on reporting underperformance.” By explaining what went wrong, you give your clients and prospects more confidence in how you’ll manage things in the future. After all, if you can’t recognize your mistakes, how can you fix them. Try it!

MISTAKE MONDAY for January 25: Can YOU spot what’s wrong?
Scroll to top