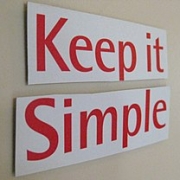 “One idea to a sentence” is the title of a section in Theodore Bernstein’s The Careful Writer: A Modern Guide to English Usage. It’s also a darned good idea for financial writers.

Bernstein advises this approach for “those kinds of writing in which instant clarity and swift reading, which are other ways of saying quick comprehension, are dominant desiderata.”

This analysis led to the one-idea-per-sentence approach. That’s partly because “Confining a sentence to a single thought will usually reduce the number of words.”

If the folks whose work I edit took this approach, I would spend less time breaking long sentences into two or even three sentences. This kind of editing is an easy way to boost readers’ comprehension.

Of course, I must be careful not to create what Bernstein calls a “splinter.” Sometimes, as Bernstein says, “a writer or an editor ineptly splits a long sentence, then finds himself holding a meaningless splinter like this: ‘The charge came after an assertion by District Attorney Hogan.’ “ This is part of what writing guru Bryan Garner means when he calls for “no brevity without substance.” I think he and Bernstein have similar philosophies about the characteristics of good sentences.

I also tend to favor one idea per blog post. But that’s a topic for another day.

The photo in the upper left has is courtesy of Jimee, Jackie, Tom & Asha [CC BY-SA]

Click here to view the newsletter archive
Down with nouns!

Describing an interview-based assignment to writers
Scroll to top